The magic of mushrooms! 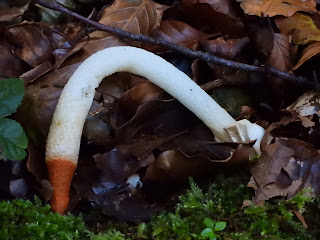 Autumn is a magical time for the world of fungi, and our mild weather interspersed with rain has made conditions ideal for them to grow. With our local lockdowns seeing me unable to venture out of my borough into Newport to visit Goldcliff for the birds, I have found myself instead spending more time than usual in the local woodlands. Although I have been watching the birds as well, I have taken the opportunity to look for fungi, and always on the search for what we call a lifer - a new species for the list. I have been seeing pictures on Twitter of people finding Earthstars, Bird's Nest Fungi and Devil's Fingers - all of which are lifers for me, and my enthusiastic search for these continue, so far to no avail, but I will keep looking. Back in September, one Thursday evening after work, fortune was to smile on me. Since a young boy and reading the then weekly and very popular Living Countryside magazine, I always desired to see certain species that stood out as they looked so
Post a Comment
Read more

A few bits and pieces 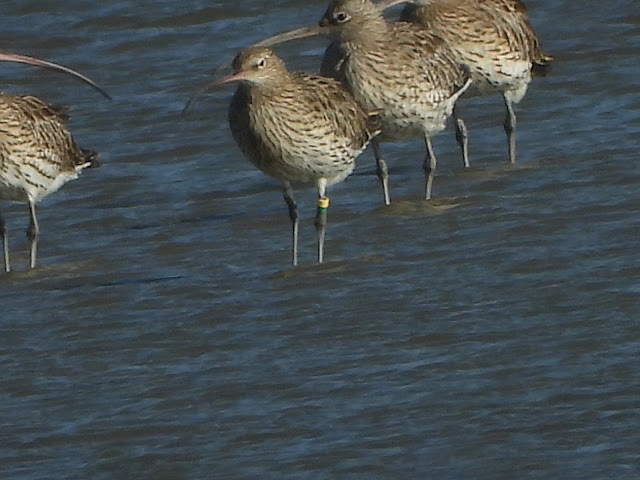 Every now and then, a wader turns up at Goldcliff on the Gwent Levels, where I do nearly all of my coastal bird watching. Recently I was scanning through a flock of 40+ Curlews when I noticed one of them had a set of colour rings on its legs. Knowing that there is a Curlew Ringing Group locally I took some pictures and emailed them off to see if they could find out the bird's history. I was pleased to get a reply a while later, and to discover that this bird was ringed as a breeding male back on the 21st of May 2012 in Saerbeck in Poland, and has bred every year since. I was thrilled to get some feedback on this bird and it intrigues me that a bird can cover such distances. I am keeping a look out for this bird. A while back I spotted a Canada Goose with a leg ring with the letters FANC on it. It transpired this bird was ringed at Windermere several years ago and likes to frequent the Gwent Levels. There is currently a ringed Black-tailed Godwit at Goldcliff and the details and pic
Post a Comment
Read more

Oh so there they are! 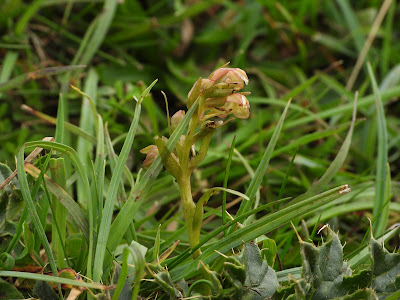 My favourite group of plants are the orchids, and the last two year's have seen some great additions to my list with the last one being the Bird's Nest Orchid. In the same area of my local site are records for Frog Orchids, and after picking the brains of several people I managed to narrow down roughly where they were. Unfortunately, Sheep graze the particular slope where they apparently grow, so this was going to be a hindrance. For the past three years each June and July I have been painstakingly searching the area, spending hours on occasion, and each time leaving feeling disappointed at not finding any. This year however, my friend who is a parks ranger had a tip off from a fellow ranger who said he had recently seen some Frog Orchid leaves, and we were given a better location. This was exciting news, and by Thursday afternoon I couldn't contain my excitement any longer and I was off, back to the area in question. I settle down to search for them, but they
Post a Comment
Read more

The search is over for the elusive Yellow Bird's Nest 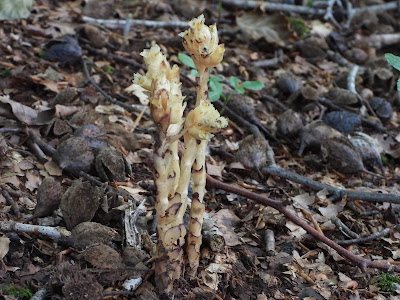 Back in the 1980s, a weekly nature magazine hit the shelves called the Living Countryside. I used to look forward to buying these and they were about £1.50 if I recall. I learned an awful lot from these information packed magazines and every now and then there would be a picture of something that would catch your eye and make you wish one day you would find one. One such plant in one of the editions was a Yellow Bird's Nest. It looked strange and had a strange name. I was hooked, I really wanted to see this species. I was really getting into my plants but as time went on I never seen one - until now. A site I know close to where I  live has a section of ancient woodland, mainly mature Beech trees, and this is where the Bird's Nest Orchids I had been photographing were growing. But walking through there on early evening this week, mainly on the hope of seeing a late orchid - I was astonished to find not one but a tight group of ten Yellow Bird's Nests. I knew str
Post a Comment
Read more 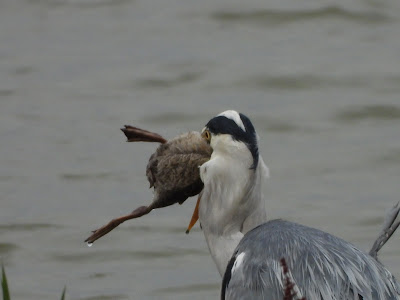 Goldcliff this week saw another early start and a good selection of birds, with migration slowly getting underway. En-route to the first hide were Stock Doves and a Chiffchaff calling with 6 House Martins flying around. A Greenshank was a nice surprise once I opened the shutters in the first hide, but a Grey Heron soon caught my attention. It had caught a three-quarter grown young Coot and stood at the edge of the bank trying to swallow it whole. This went on for several minutes before finally the Heron gave up and dropped it on the ground before flying off. I appreciate this is a part of nature , but it is horrible when you witness this close in. The Coot will soon become food for scavenging Crows and gulls. Two friends, Dan and Andrew from the Ross-0n-Wye area met me and it was lovely to finally catch up - the last time we had spoken was late March here. Next the Redshank Platform saw a lot more life - with a Sedge Warbler feeding in the foliage. Lapwing and Avocets we
Post a Comment
Read more 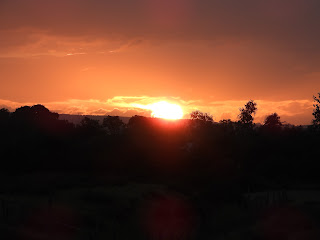 Well it had seemed like an eternity. My last waders were back in late March prior to the lockdown that saw travelling restrictions imposed, and for good reasons. I like many others had been waiting for news that travelling would allowed further than five miles, and with Monday 6th July being the set date I was off, arriving at Goldcliff at 04.30hrs. It was so nice to see and hear the waders again and smell the sea air. The visit was eventful and a great reintroduction to being back on the Gwent Levels. The Glossy Ibis showed briefly at 0510 after I had watched the Sun rise at 05.03. I had walked straight around to the sea wall to watch the sunrise then made my way down to hide three. From the sea wall were 11 Avocets out on the mudflats. A pair of Whimbrel from the hide was a nice surprise A Barnacle Goose dropped in briefly before flying off over the sea wall, 9 Swallows and 8 Swifts passed close by and Linnets were flitting back and forth. From the marsh platform 2
Post a Comment
Read more 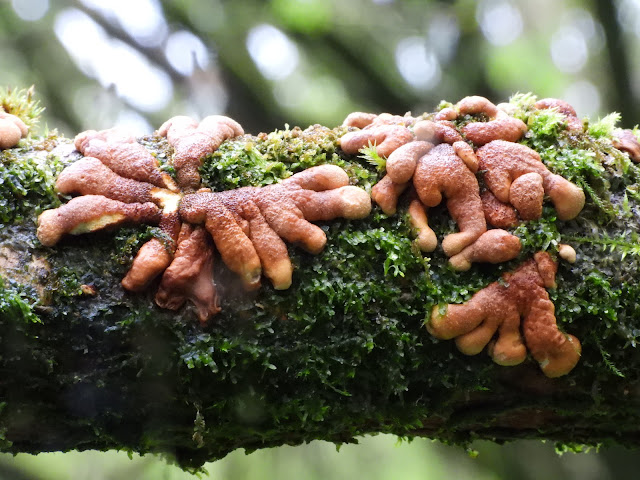 Hazel Gloves -  Hypocreopsis rhododendri So here I am, photographing a group of Early Purple Orchids which I monitor each year, and as I am about to walk away I look across to see what I at first assumed to be Curtain Crust fungus growing on a branch of an old Hazel. Something told me to go a little closer and I'm glad I follow my instincts sometimes, because when I looked closer I could immediately see this was something different. I was certain there and then what this was and my heart was racing. This was a lifer for me and I was tempted to put a tweet message out there and then saying what I had found, but I just wanted to be that 100% sure. I emailed Pat O' Reilly, author of Fascinated by Fungi, and he confirmed what I had found - I knew it.  To say I was very excited would be underestimating how I felt. So what are Hazel Gloves? They are a rare fungus, and in Britain it occurs only on old Hazel trees, often in ancient coppice woodland. The finger-lik
Post a Comment
Read more
More posts